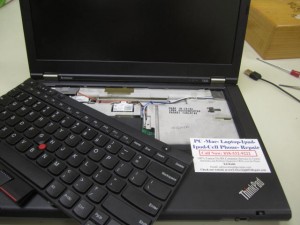 This laptop lenovo t430 was serviced for water damage repair. it was a fairly new laptop less than a year old and had warranty, however as you may or not know. Manufacturer doesn’t usually cover water damage accidents. if it happens to you – you’re out of luck no warranty will be granted.

However luckily for you and this guy there is people like us. This lenovo t430 laptop after the fluid was spilled. it was actually beer. we don’t know which brand, but it definitely got the laptop pretty drunk.

it wouldn’t turn on. or if you pressed many buttons on the keyboard at once with the power button it would randomly come on at times. so it was somewhat a good sign. It meant laptop was working, but it most likely needed cleaning. because any fluid. even water and especially beer, will leave residue on the board, keyboard or any other place it gets into.

After taking it apart, it got pretty clear that keyboard was damaged because some keys were very sticky and there were spots of beer on a case as well as some parts of the motherboard. So long story short. after a thorough cleaning the laptop came on and was working fine. except of the keyboard. we ordered, replaced it and lenovo t430 laptop after water damage was running as good as new!