Macbook Air Water Damage Repair – Not What It Seemed 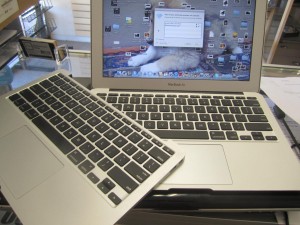 After the water (fluid) damage occurred the owner of this macbook air A1370 has taken it to an authorized apple repair place and they charged him $75 for diagnostic, after which, they presented him with a repair bill, which was about 790.53 after fees and state taxes. they were gonna replace the logic board and housing top case with keyboard.

Luckily this guy has decided to get a second opinion and get his macbook air checked out elsewhere. After he found overnight pc repair on google, he brought laptop to us and we looked at it closely, we got it to turn on right away and realized there was something wrong with it.

As in many water or fluid damage cases it is hard to pin point what has gone wrong because many things can go wrong fast. so in this case we diagnosed that only the keyboard needs to be changed in this case. it was the only thing wrong with it. not logic board, not even a mouse pad. And since customer provided us with a new top case and keyboard we replaced it for him and macbook air was working flawlessly! without having to spend nearly $800 for logic board replacement.

so here is another example of how nice apple is, until something goes wrong. Then they charge you arm and a leg and many people like to pay them, because they trust them. When at the end it still turns out you got to do what Reagan said. Trust, but verify! that is always get second opinion. it will save you money and you might then see things for what they really are.

at overnight pc repair we service, macbook, macbook pro, macbook air, imac and other apple products such as Ipad, ipad 2 and ipad 3 repair, as well as iphone and ipod repair! call us at 818-532-9333 to get an estimate over the phone!