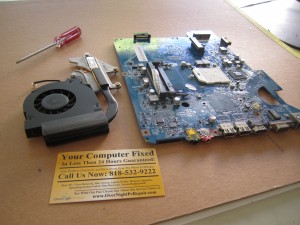 One of our valued customer called one day to express his disappointment because his Gateway Nv52 laptop would not start. After couple of questions and few little tests upon our suggestion (performed by customer himself), we diagnosed the gateway nv52 laptop has failed because of the misfuncion of the motherboard inside of it.
we quickly looked to find a solution, which was to replace faulty motherboard with a working one.
we looked and have found a refurbished board for a decent price, went ahead and ordered it.
it came in few days later and upon installation we realized it was shutting off. gateway laptop nv52 would work for a little bit nicely and then it would shut off on its own. we had some red flags go off and thought it was a faulty board. because from experience when buying a refurbuished motherboard (refurbished means it has failed at some point and was repaired to a working condition) there is always a chance it was not tested well or, it might have still be damaged.
Our customer was getting anxious too so he decided to go ahead and purchase a new motherboard instead. So we went to search for a new one. First place we called was gateway. Yes, the laptop maker- Gateway. They told us, they don’t carry these boards and reffered us to a third party company mundocorp.com which was supposed to have all gateway boards. Upon contacting mundocorp we found out the nv52 motherboards were not currently available.
so we were back at square one. Looking for new motherboard from other sources, which were were scarce.
Finally we did find one nv52 motherboard and went ahead to order it. After receiving it and installation, we found out it was shutting off too. Then it was clear that it isn’t the motherboard problem after all. It was rather a failed heatsink, which was not transferring heat properly. Now heatsink don’t fail very often, but sometimes they do. And the reason usually is, because of the fluids inside the copper part of the sink. when there is a little crack or a little defect in the copper part, then fluids, leaks out or gets evaporated and it stops transferring heat properly. Then the motherboard gets hot, too hot it burns out and dies.
Upon getting a new heatsink things got much better. Board was working properly, customer was happy!
at overnight pc repair we go an extra step to get problems resolved and get your computer fixed as fast as possible call us at 877-938-8777 and we can help you even if you live out of state