Motherboard Swap of HP Compaq 6710b

Wanna know what happens when computer gets dropped on the ground?

As you may guess, nothing too pleasant – both for you and for the laptop. for you its stress, disappointment, hassle and a bill at the end. For laptop its near death experience, requiring a “heart” (motherboard) transplant. 🙂 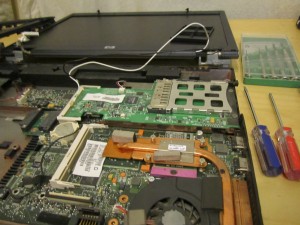 So the story goes like this. Person has accidentally dropped their hp 6710b laptop from waste up on the ground. I did not see it, but can only imagine it was a pretty heavy hit for the laptop. as it would be for any device or even human for the same matter.

the consequence was pretty obvious. The computer would turn on, but there was nothing on the screen. it was blank.

At first it looked like a faulty video chip, a problem that many HP laptops get. When the video chip fails, due to cracked internal wiring inside the chip. you get exactly the same kind of result. Laptops seems to be working, judging based on the lights that come on and the fan working, etc.

However the screen remains blank, no matter what you do. As well as there isn’t usually any output at the external monitor connector either. 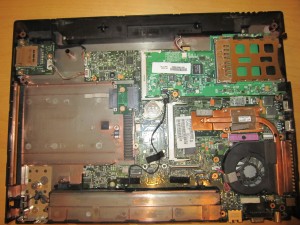 After I determined Hp Compaq 6710b motherboard was faulty, I ordered one, it arrived from San Diego, CA (one of our parts suppliers) in about 3 days. I swapped it the same day as it came in and voila! Laptop powered on and was working.  However, many times when you replace a motherboard on any computer, you usually run into operating system problems too.

Even though the motherboard is identical, some components on it my be a little different and at the level of operating system it makes huge difference.  Usually its the blue screen that you get when you start the computer or computer freezes and such.

Best thing to do in this case is to do a windows repair. You get a windows disc, put it in boot from it as if you would install fresh copy of windows and then do a windows repair feature. it works like magic. it repair windows operating system, rewrites all drivers but leaves all programs in tact the way the were before the crash.

Final Result: another Client happy to get back to do their homework!

for all pc repair questions call 877-938-8777 they will be answered at no charge with the best computer advice there is.  Overnightpcrepair.com is quickest quality computer repair in los angeles area!

Check out our computer repair forum where you can post questions to get computer help at: http://www.overnightpcrepair.com/forum/#/