Why It Is Deadly Important to Clean the Cpu Heat Sink of Dust! 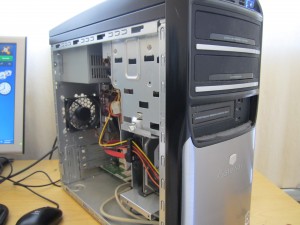 This gateway computer was brought to us because it was giving its owner a BSOD – Blue Screen of Death. at first our conversation sounded like this:

-Has blue screen been appearing often? answer was yes.

-What operating system are you running? Windows 7 upgraded from windows vista.

-Have you installed any new hardware or new software recently? No.

So next best thing I recommended to try and reinstall with a fresh copy of Windows 7 and not the upgrade. The person did so. and called me next day saying it was still giving him blue screen of death (bsod).

Needless to say – the computer repair expert was needed immediately!

As soon as computer was brought, we opened a case and saw that there was a lot of dust on the heat sink. talk about that much dust, where almost all the holes on top of it are covered. We didn’t even turn it on, but I can imagine the cpu fan had to spin pretty crazily. And it did (we later confirmed with the client). So we cleaned it out right away and started the pc.

Our first thought was that blue screen would appear because of over cpu overheating. However that simply defies all the rules and principles. because Blue screen of death (BSOD) only appears “because of incompatible drivers” “or incompatible hardware” – or so you would hear from any of the so-called-computer-experts anywhere.

Long story short. Next thing we did, since the fan was already cooling things down properly. We disconnected the cpu fan and well enough we got to witness blue screen of death for ourselves after we left computer on for about 20 minutes.

Upon reboot, we went into BIOS settings to check how the CPU temperature was rising and falling. After going through some settings for couple of minutes. my eye caught one interesting thing. there were two settings controlling cpu safety due to overheating:

and to my big surprise they were both OFF.

So here came the answer: CPU was overheating due to clogged up with dust cpu heatsink. Cpu would naturally overheat, sometimes in 20 minutes, sometimes in 30 minutes depending on usage and it wouldn’t know what to do afterwards. So system simply came up with blue screen of death.

I imagine hair raising up on someones back now, who is into CPU chips and micro technology. it is suffice to say that its not good at all for CPU to overheat like that to the MAX without being properly shut down at certain temperature.

But luckily it still works and functions without any trouble. Client is happy. Computer works great! Problem solved!

if you reside in chicago or los angeles and you have computer problems, overnight pc repair is a place to bring it to. our expertise is immediate and backed up by daily hands on experience of handling all kinds of computer repair issues. call us at 877-938-8777 now!