Macbook Repair – What NOT to Do When You’re Angry!

I never get calls to fix Apple Mac.  Throughout 3 years I can count on fingers how many calls I got. and all of the sudden recently I had two clients with similar issues.

so here is one – pretty funny to begin with! This client was referred to me by previous client.  And as promised to all people who referred she got a $10 jamba juice gift card as encouragement to send more clients in the future!

So the guy brought the macbook and said he punched it, hit it and then slammed the screen so hard, the macbook flipped in the air and he had to physically catch it, so it doesnt hit the table.  Luckily he did. But not without damages 🙂

when he called he said he didnt see anything on the screen except white and nothing else would happen. He also added he needs to leave country on saturday, which was in less than 2 days.

I told him not to worry and just go about his business, because overnightpcrepair would take care of it in less than 24 hours. Because we are fastest computer repair shop in los angeles! no doubt about it!

So few moments later, after he left, we diagnosed failure of the hard drive.  and it made perfect sense. hard drive is such a component which ought not to be hit, dropped, or roughly handled, even as small as they are in laptops. Hard drive are to be handles with care, gentleness and love. Like women.

To be absolutely sure, we ran couple of tests and they proved to attest our guesstimations 🙂 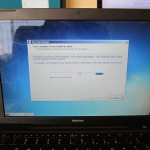 microsoft windows on it. here is a pic: 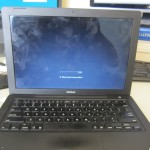 Long Story short. if you have to hit something when youre angry, hit a wall, a tree or something more sturdy than a computer. now customers files are gone. or rather are too expensive to extract. watch this doesnt happen to you! and thats end of story.

for all pc and mac repairs in los angeles call 310-775-2397 or visit www.overnightpcrepair.com (better call)