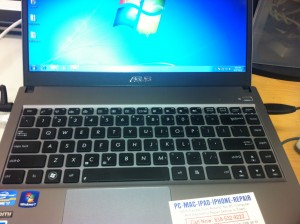 This Asus U47a computer with I7 processor was bought about 1 year ago. surprisingly enough there were couple problems with it already. first the battery was not holding charge at all. Not even a bit. if you unplug it from the power source it dies right away.

second thing and the main reason person brought it in for repair was that windows would not boot up. there was an error message on the screen saying boot manager was corrupt.

At first we tested the hard drive to make sure it was not failing. it had couple bad sectors, but it passed the smart test with couple of testing tools. hard drive turned out to be ok. then tried to repair the boot manager with a windows 7 installation disk, however that didn’t work either. and since the person didn’t have a lot of software on it they agreed to reinstall windows on it and start all over.

so here is where the fun began. After windows installation there was an interesting issue we were facing. we did not have the original windows 7 disk for this computer, since manufacturers don’t include them anymore when you purchase laptops. We used original Oem windows 7 home premium disk, just like we do on all other installations.

Installation went smooth, windows installed and then we realized there was a little catch 22 here. after installation computer was missing pretty much all the drivers. LAN driver, wifi driver, usb driver and few other ones. since the usb drivers were missing no usb device could be used to transfer drivers on the computer. since LAN and WIFI drivers were missing computer couldn’t connect to internet for drivers to be downloaded.

What we ended up doing is downloading LAN driver onto another computer, burned it on a cd-r and then installed it on this Asus U47A laptop. then downloaded rest of drivers. its not a big deal, but its kind of interesting I thought that all of the usb’s on this are usb3.0 and most of the time require to download drivers for windows 7 separately. so if perhaps some of you might get stuck with it too. now you know how to do it 🙂

for any computer questions email us at fix@overnightpcrepair.com