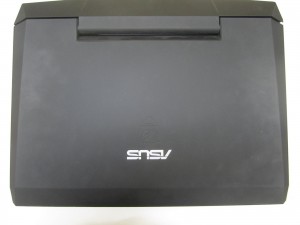 Asus G53J dc jack repair and Asus G73j Dc jack repair happened almost the same day. And we also had another Asus A53S dc jack repair one day later. I guess it was a Asus dc jack failure week. but hey it was not too bad and it was interesting to remember something we used to do way more often. Asus g53j are older generation gaming laptop from ASUS they have really nice specs, can be loaded with tons of RAM memory and are  truly good gaming laptops. They did come with a little dc jack problem and it was a very common repair a while ago when they were more popular. 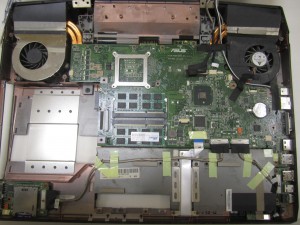 The reason for that was the dc jacks they made were badly designed. the tip of dc jack was slightly to thick and would break very often when the adapter was plugged in. It happen to this G53J laptop as well. The tip usually stays inside the adapter tip and is almost impossible to remove.

Asus G73J is also the same Asus Gaming series laptop only newer version. the customer brought it also because her jack broke. but it broke differently it actually snapped of the board a bit and it was still working for a while but then finally stopped because she was wiggling it too much.

At overnight pc repair in woodland hills, Ca (near calabasas, ca) we repair dc jacks of all sorts on all laptops. it usually takes up to two days if we don’t have a jack in stock. and if we do it takes only few hours to complete the job. You will not find a faster dc jack repair in los angeles I promise you that! call us for a quote and a time frame now  at 818-532-9333