so here is our take on Akamaihd or akamaihd.net removal.  I thought it would make for a nice computer repair case study as well as reiterate couple of things I’ve been preaching to people for years now.

we got a call from an existing client of ours, she said her computer is full of pop-ups and viruses. our tech went out to their office and did the basic clean up routine: run malwarebytes, tdsskiller, adw cleaner and remove other adware thingies from programs and features list.

when everything was said and done everytime one would open up chrome browser and did pretty much any search, this akamaihd adware would pop up. it would redirect to an akamaihd.net site with additional url that would have some advertising in it.

it was obvious that only chrome had it. and it was obvious that Norton 360 that customer had installed and paid for, wasn’t doing anything about it. in fact none of the programs would remove it.we first turned to the internet and followed few of pretty much same instructions from malwaretips website. but none of them worked. we also tried combofix, jrt, adw cleaner and other applications but nothing would remove the akamaihd.net redirect. it was also obvious that chrome had an mediaplayerv1 extension inside, which couldn’t be removed by just clicking a remove button.

so upon hearing what my tech has tried, I instantly recommended to run a scan with kaspersky internet security. which of course was a pretty big hassle. we had to get rid of super norton 360 first. but we did and what do you think happened? kaspersky internet security found 3 objects and one of them was a javascript mediaplayerv1 plugin for chrome. it took 25 minutes. and akamaihd.net was gone.

therefore boys and girls don’t be afraid of kaspersky internet security. even though it is made by russians it is by far one of the best antivirus programs out there. much better than Norton, mcafee, avg, MSE, and other crappy stuff. if you are going to pay for antivirus, pay for something that will protect you from anything and kaspersky internet security does so very very well. I haven’t had a client come back with virus ever after we installed it and we installed quite a few of them.

of course akamaihd, could have been removed manually from chrome extensions folder as well. but we didn’t have to do it because something did it automatically. I am posting a picture of the screenshot to the location of akamaihd chrome extension just in case someone wants to go delete it by hand! good luck! 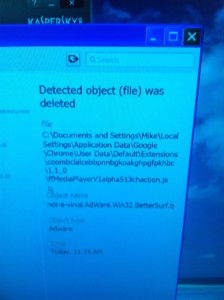