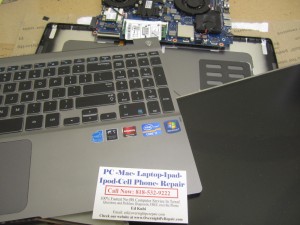 This was the second Samsung 700N that I have replaced a screen on. However this version was different from the first one. it was not a very easy one.

in fact this samsung 700N is pretty much a weak attempt at copying macbook. it is sort of Unibody style. This means the main body is actually a top case, it holds motherboard, keyboard and other components unlike earlier pc models where everything sits on the bottom case.

So long story short to replace a screen on this samsung 700z you will need to take the whole laptop apart, down to the motherboard, because the screen assembly must come off to take the lcd out. it is probably possible to do it otherwise, but you might damage the lcd if you don’t take screen off the main body.

I can see how this samsung 700N laptop was a very weak attempt to copy apple macbook. everything is sort of like macbook, but only cheap looking and very poorly designed. but attempt is not bad. I think designers were actually using macbook as their example to make this.

Either way it was not too bad even taking the whole thing apart took maybe one hour or so.  it is a pretty good laptop otherwise nice fast and good lcd screen on it! worth the money!