Is This Ipad 2 or Ipad 3? Quick Repair 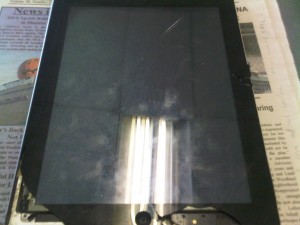 Is this Ipad 2 or is this Ipad 3 was the question the customer asked, when they brought their Ipad for repair. Apparently she has bought it from craigslist and at the time was not very concerned of what she was getting. And if you had both ipads in place you could tell difference if they were on, the new ipad (ipad 3) has a retina display and is much more clearer and crisp. But other physical differences are tiny. The only thing I found that is clearly comparable is the camera on the back. On the ipad 3 it is slightly larger than on the ipad 2. in other ways ipad 3 is slightly thicker by 0.66mm and slightly heavier (50g).

After having repaired many glasses on the ipad 2, my mind still froze when faced with the question, even after I looked at the cable inside the ipad. It was visible, because customers kid has damaged ipad 3 pretty bad as you can see in the photo. So I said it is ipad 2 🙂 and I was wrong, after I removed the digitizer, I noticed it was ipad 3 and it uses slightly different glass than ipad 2. In fact I don’t have  picture now, but she decided to repair ipad 3 glass and switch it to the white color, which is also possible if you desire so. I will attach picture later! to show you how it looks! cheers!