Ipad 2 3g No Sim Problem and how to solve it. 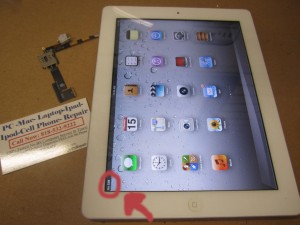 before yesterday I haven’t seen this problem before nor have heard about it, but apparently many people are having an issue of SIM card working on and off for a while on an ipad and then stop working all together.

Many people then take their ipad to the apple store and they take a look at it and try to fix it, but usually with no luck. I also read on forums apple then starts blaming ATT saying these are bad SIM cards and ATT then blames Apple saying its bad hardware.

Geniuses at Apple though suggested it is a hardware issue and needed to be fixed. So its not big deal if you have warranty on your ipad. they fix it free. Or they replace ipad.
And what to do if you get ipad 2 3g No SIM detected or says No SIM and you are out of warranty? do you pay them half the money to get new ipad? or do you get it fixed?

I personally think you get if fixed. because it doesn’t cost that much to do. As on this one, we opened ipad up, and replaced the whole 3g housing cable with audio jack and the SIM started working!