If You know me, I am indeed a big proponent of custom built computers. They’re great, they are exactly what you want them to be and they are easy to maintain if of course you know what you are doing. There used to be time when it was pretty much necessary to do so.  For couple of reasons: it was cheaper to build one custom and you could specifically select particular components to match your specific computer needs. Nowadays only second reason stands and also only half way.

See if you are just a regular computer user, you check email, browse internet, watch a movie, perhaps do a word processing or some other application, there is really no need for you to go custom, unless you just want to be cool and build yourself a computer that looks good, and you can say to your friends it has been built custom.

Otherwise, buying a dell or an HP will seal the deal for you without any question. Ever since parts have gotten so cheap and these mass produce company giants are able to sell completed systems with monitors and printers for same price you can build your own.

so unless you are a gamer, or you do a lot of video editing, there is really not much you need to worry about when getting a new computer. In my opinion any new computer you buy from any store today will be more than enough for you and your families needs in terms of speed, picture quality and sound quality as well.

And here is the case I wanted to tell you more about of an older custom built pc and it problems we ran into with it: 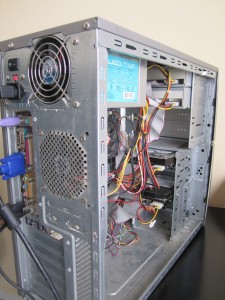 The system has no name it comes with:

So the initial problem as we got the computer – it wouldn’t start.

After opening the case, I had literally pulled out a gas mask, so I don’t inhale a so to speak – an excessive amount of dust. which had to be cleaned out, because processor was not getting any air whatsoever, in fact if you ask me, that’s how you get processor fried. 😉

Anyway, first thing I noticed was in the BIOS I was getting the message – “Unknown Flash Type” – so my first thought was, someone has tried to flash it (re-write it) and failed doing so and it was severely messed up. However I decided to proceed and did some more testing to it. Hard drives turned out to be ok, motherboard too. and the rest looked fine, however computer would instantly reboot as soon as it loaded windows.

so I finally proceeded to repair windows xp, because I thought thats where the problem was, but couldn’t do it, because it was giving me error. something strange was happening to which my inner intuition about computers was completely confused this time and couldn’t pin-point what the problem is. it rarely happens but it does sometimes.

After reinstalling windows, I noticed that the extra video card, was not working properly, as if the driver for it was not correctly installed. I reinstalled it 4 different times looked and matched drivers from different sites but without luck.

So I yanked it out and put it on the table next to me. As soon as I did that, everything fell into place. pc starts and boots nicely (unknown flash type message is still there), loads windows and works perfectly.

conclusion: the point here is – some components don’t go along well with one another and especially if they are a little older. so taking them out and testing pc in as basic mode as possible is a must. 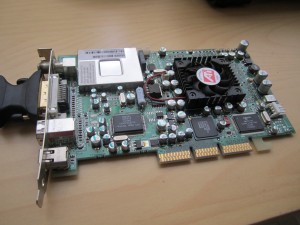 Result, happy client to get his computer back. His files were saved, pictures and music preserved.

for all computer repair questions, call www.overnightpcrepair.com at 877-938-8777. we are the fastest quality pc repair shop in santa monica, los angeles and san fernando valley!